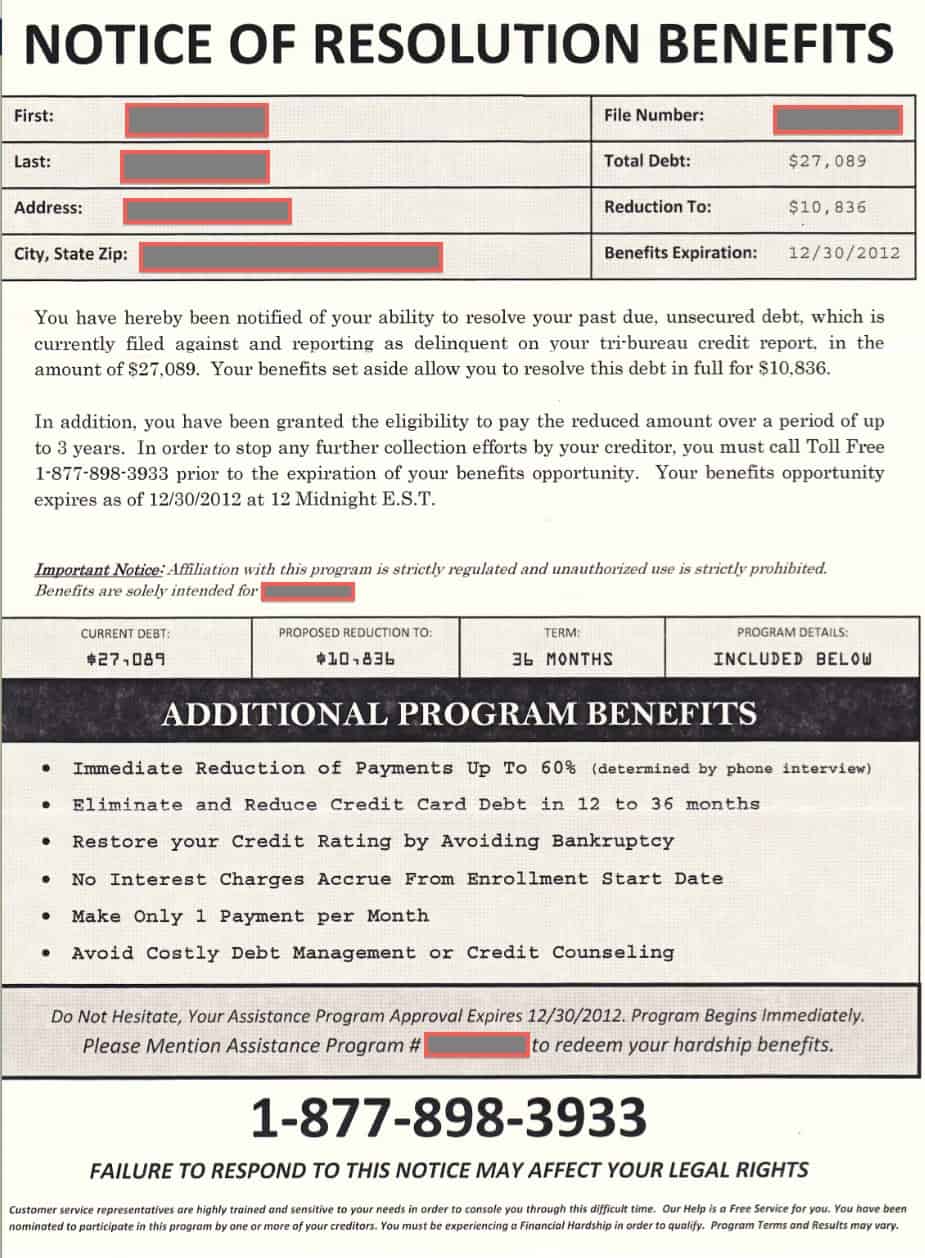 A reader and tipster (send in your tips here) sent in the form below and was frankly, pissed by the marketers. The consumer said:

“My wife has received two if these notices. Both were the same, with the tri-fold and tear edges like bank or government mail. Neither say anything about advertising. Both claim we are 27,089 dollars in debt. It freaked us out thinking at first, that we were victims of identity theft. How is this legal? Nothing mentions that it is advertisement, that the numbers reported aren’t real, it says that we only have so much time to resolve this issue, and that failure to respond will affect our legal rights- all fraudulent claims.”

So I called the number on the mailer, 877-898-3933. As you will hear, the representative can’t tell me the name of the company. In fact he hangs up on me. It has to leave you wondering, if the offer is legit and upstanding then why can’t they even tell you the real company name or where they are located?

The representative gives me some line that he can’t tell me the identity of the company offering the “federally mandated” program because they help consumers in hardship and they are so exclusive that giving out their business address would be a security issue. That’s total bullshit and I call him on that.

From the appearance of the mailer it looks like a marketing ploy for an advanced fee attorney model debt settlement service. The representative even mentioned attorney negotiation on the call. The mailer makes claims that the Federal Trade Commission cracked down on a couple of years ago now because they felt they were deceptive and unfair. They also labeled such claims as unsupported and illegal. The only one likely making such claims today would probably be an attorney firm that feels they are exempt from complying with those regulations.

The claims made are:

The mailer also says that the consumers information may have been gathered from the credit bureaus. That in itself is troublesome and has been the subject of other FTC actions. See Do Debt Relief Companies Face Liability When Buying Credit Bureau Leads?

Maybe this was the wrong day for this type of crap to cross my desk but it is downright shameful for these deceptive and misleading mailers to continue to be sent to consumers, especially when the companies can’t even identify themselves in the light of day.

If they are not doing anything wrong then why not put their name on the mailer or tell callers? Makes you wonder, doesn’t it.