Just because you got a 1099-C form from forgiven debt is not a reason to immediately panic and think you will automatically owe a lot of taxes on the forgiven debt.

In the debt world, a point of contention is the chronic misinformation about forgiven debt from debt settlement or a debt determined to be uncollectible.

You will often see this misinformation used by credit counselors as a way to scare people into enrolling in their program.

A forgiven debt of $600 or more will indeed generate a 1099-C. This is a form reported to both the Internal Revenue Service (IRS) and the consumer.

The instructions on the 1099-C form say:

“You received this form because a Federal Government agency or an applicable financial entity (a lender) has discharged (canceled or forgiven) a debt you owed, or because an identifiable event has occurred that either is or is deemed to be a discharge of a debt of $600 or more. If a creditor has discharged a debt you owed, you are required to include the discharged amount in your income, even if it is less than $600, on the “Other income” line of your Form 1040. However, you may not have to include all of the canceled debt in your income. There are exceptions and exclusions, such as bankruptcy and insolvency.”

If you received a 1099-C many years after a debt became uncollectible, you need to know about little known IRS Form 4598.

But that’s where may run of the rails with their message all income is taxable if it is forgiven. They miss the point “There are exceptions and exclusions, such as bankruptcy and insolvency.”

In fact, there is a code for the 1099-C that appears to be tailor-made for debt settlement reporting:

“Code F is used to identify cancellation of debt as a result of an agreement between the creditor and the debtor to cancel the debt at less than full consideration.” – Source

And this one is used when a debt becomes uncollectible:

“Code G is used to identify cancellation of debt because of a decision or a defined policy of the creditor to discontinue collection activity and cancel the debt. For purposes of this identifiable event, a defined policy includes both a written policy and the creditor’s established business practice.”

If you have forgiven debt, IRS Form 982 will be your best friend. 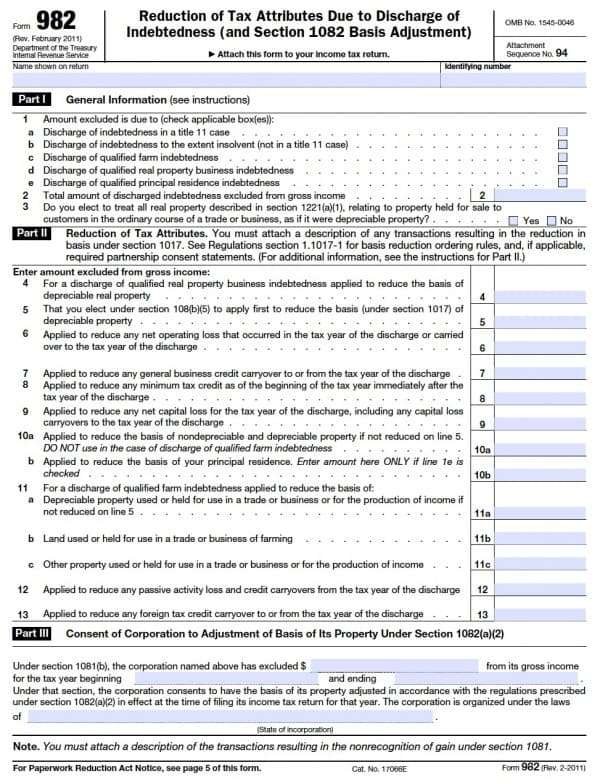 There is no tax liability for all of the forgiven debt for those that eliminate their debt in bankruptcy. It’s just a simple checkbox on IRS Form 982. See Part I, line 1a.

For those that have forgiven debt from debt settlement, then you need to check 1b.

The forgiven debt is taxable above the amount where you become solvent. Here is what the IRS says:

Check the box on line 1b if the discharge of indebtedness occurred while you were insolvent.

You were insolvent to the extent that your liabilities exceeded the fair market value (FMV) of your assets immediately before the discharge. For details and a worksheet to help calculate insolvency, see Pub. 4681.

The IRS even provides a worksheet to help figure out if you are insolvent. In most cases I’ve seen, the majority of people with a 1099-C were insolvent or mostly insolvent when their debt was forgiven. They have plenty of other obligations that weigh them down.

By filling out IRS Form 982, you can avoid any income tax due on the forgiven debt.

And as the example above shows, they only have to pay income on the forgiven debt above the point they become solvent, meaning their assets are more than their liabilities.

For specific tax advice about how all of this applies to your situation, see a qualified tax adviser.