It seems more and more people are getting tax form 1099-C issued now for the forgiveness of old debt from as long as twenty years ago. That’s a problem for consumers. This old debt is sometimes called “zombie debt” because it appears to come back from the dead.

The first thing you should do is not panic. There is a good way to deal with this old debt, but it will take a methodical approach. The most disturbing part of this process is if the creditor had issued you the 1099-C for cancellation of debt, in the year the debt was actually canceled, you might not have had to pay any taxes on the forgiven debt if you had been insolvent at the time. You could have filed IRS form 982 and had the taxes eliminated. 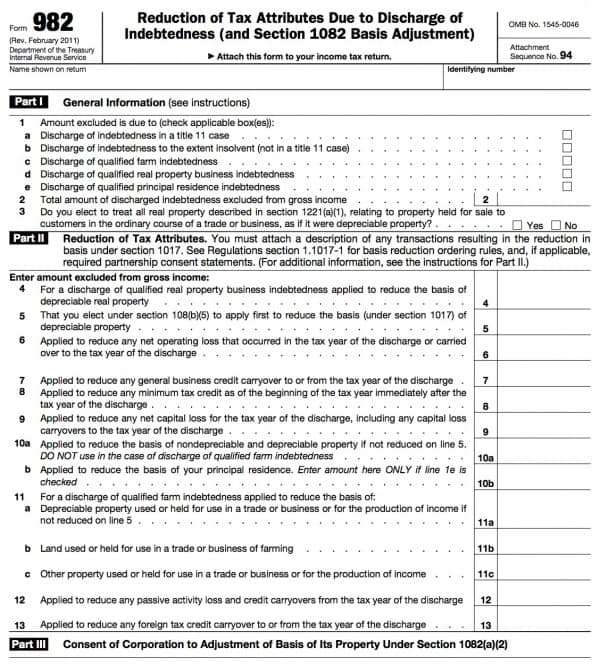 But now, years later, your financial situation may have changed for the better, and up pops this old debt again. If you are no longer insolvent, meaning your liabilities are bigger than your assets, then you might be told you have to pay income tax on the forgiven debt, just as if you had earned the forgiven debt as income this year.

Back the Tax Bus Up

The IRS has a process in place for dealing with this situation. Ironically, however, they do not provide this form on their website at IRS.gov. Jim Buttonow, a CPA and frequent contributor to this site, says that to deal with this errant 1099-C, consumers should:

The last public mention I could find of this little-known form was from the Federal Register in 2007.

If you feel you are not qualified to handle this process and deal with the IRS on your own, there is no substitute for good tax advice. Seek a local tax professional or an Enrolled Agent to assist you in this matter.

Regardless, make sure you document and keep a record of all contact with the IRS on this matter. Properly dealing with this can save you tens of thousands of dollars in tax you may not have to pay.

A recent court case involved a similar matter. In this case – the borrower stopped paying their credit card debt in 1994. The lender wrote off the debt in 1996. They stopped collecting in 1999, and subsequently, a collection company attempted to collect on the previous debt through automated means.

The borrower argued that the meaningful collection and statute to collect had long passed. In the case, the Court agreed, and the cancellation of debt was not income in 2008- when the 1099-C was issued. The big problem was that they had to fight the IRS to win it, which is an expensive battle.

“The Tax Court, in a summary opinion, has concluded that a taxpayer didn’t have cancellation of debt (COD) income in the tax year that a collection agency that acquired his defaulted credit card account ceased collection activities and issued a Form 1099-C, Cancellation of Debt. IRS failed to rebut the presumption that the debt was discharged in an earlier tax year when a 36-month nonpayment testing period expired, and it was clear that the debt would not be repaid.

Background. A debt is considered canceled or discharged to result in COD income when it becomes clear that the debt will never have to be paid. An identifiable event that fixes a loss with certainty indicates the time when a debt has been discharged. (Cozzi, (1987) 88 TC 435)
The Tax Court has held that a rebuttable presumption arises that an identifiable event occurred in a calendar year if, during a testing period (of generally 36 months) ending at the close of the year, the creditor has received no payments from the debtor. (Kleber, TC Memo 2011-233) This presumption may be rebutted in one of two ways:

Facts. On Oct. 22, ’94, David Scott Stewart incurred a credit card obligation to Maryland Bank National Association (MBNA). Sometime between Oct. 22, ’94, and Sept. 6, ’96, he defaulted on this obligation. He made no payments on the debt after the default. MBNA charged off the debt on Sept. 12, ’96.

On Dec. 28, 2007, Portfolio Recovery Associates, LLC (PRA) acquired Stewart’s defaulted account from NCO. Although aware that a State statute of limitations period for beginning collection activity on the debt had expired on Feb. 15, 2001, PRA began making automated attempts to collect payments from Stewart. On Apr. 14, 2008, PRA received a letter from Stewart (2008 letter) that demanded PRA cease its automated collection activities. PRA did so and took no other collection-related action. PRA issued a Form 1099-C to Stewart, which reported $8,570.71 in COD income for the 2008 tax year.

Observation: As the Tax Court noted, the expiration of a State statute of limitations doesn’t extinguish an underlying debt obligation. It simply provides an affirmative defense to an action by the creditor. Although the expiration of such a limitation period can be an identifiable event under some circumstances, it’s not conclusive as to when a debt has been discharged.

Stewart’s timely filed 2008 return did not include the purported COD income. On audit, IRS issued a notice of deficiency, increasing Stewart’s income by the amount reported on the Form 1099-C. Stewart sought relief in the Tax Court.

On the other hand, IRS contended that Stewart’s debt was discharged in 2008 when PRA issued Form 1099-C. IRS noted that a creditor’s decision to discontinue collection activity might require that creditor to issue a Form 1099-C. Under Code Sec. 6050P, an applicable financial entity is generally required to file information returns with IRS reporting debt discharges of $600 or more. Under Reg. § 1.6050P-1(b)(2)(i)(G), a discharge of debt is defined as including a decision by the creditor, or the application of a defined policy of the creditor, to discontinue collection activity and discharge the debt.

See also  How to stop a junk debt buying collection company from re-aging an old debt?

Court’s conclusion. The Tax Court determined that Stewart did not have any COD income from PRA in 2008. It found that Stewart’s debt was discharged in ’99 when it was clear that the debt would not be repaid.

Based on the record, the Court concluded that the 36-month nonpayment testing period expired in ’99: Stewart defaulted on his MBNA account sometime after Oct. 22, ’94, and MBNA charged off his debt on Sept. 12, ’96, with Stewart making no payments on the defaulted account after the charge-off. Accordingly, the Tax Court found a rebuttable presumption that an identifiable event indicated that the debt was discharged in ’99.

That presumption wasn’t rebutted. There was no evidence that MBNA, NCO, or PRA engaged in significant, bona fide collection activity at any time after MBNA charged off Stewart’s debt. Although PRA engaged in automated collection activity for approximately two months after acquiring the defaulted account, these ministerial actions didn’t constitute significant, bona fide collection activity. Further, since the date when NCO acquired the account from MBNA couldn’t be identified exactly, it may well have occurred long after January 31 of the calendar year following the 36-month nonpayment period’s expiration.

The Tax Court also wasn’t persuaded that PRA’s decision to cease its automated collection activity and issue a Form 1099-C in 2008 was the first identifiable event indicating that Stewart’s debt would never be repaid. While the issuance of Form 1099-C is an identifiable event, it’s not dispositive of a discharged debt. The Court said that it appeared from the record that PRA unsuccessfully attempted to revive the defaulted account in an attempt to coerce Stewart, using automated mailing and automated telephone calls, to make voluntary payments to PRA despite over a decade of nonpayment and an expired State statute of limitations period. ”

Attorney Gregory Fitzgerald also weighed in on this matter from a consumer advocate point of view when people are trying to collect on an old debt claiming the old debt has not been canceled. His advice can be found in Zombie Debt 1099 Style. And You Thought Your Old Debt Was Dead.

But in an article back in 2009, “Debt Settlements May Be Voided And the Money Due Anyway” it was stated that “The court found that despite the statements and the 1099-C form, the debtor still had an obligation to pay on the past debt. Additionally, the court found that even if a creditor issues a 1099-C form, the form does not prohibit the creditor from pursuing collection of the old debt.”

There is no shortage of issues surrounding the issuance of a 1099-C and certainly the document’s late filing. That late filing creates potentially costly hurdles and obstacles for a consumer to face. When the 1099-C may be issued late, and past the time, the consumer can return and amend their tax return.