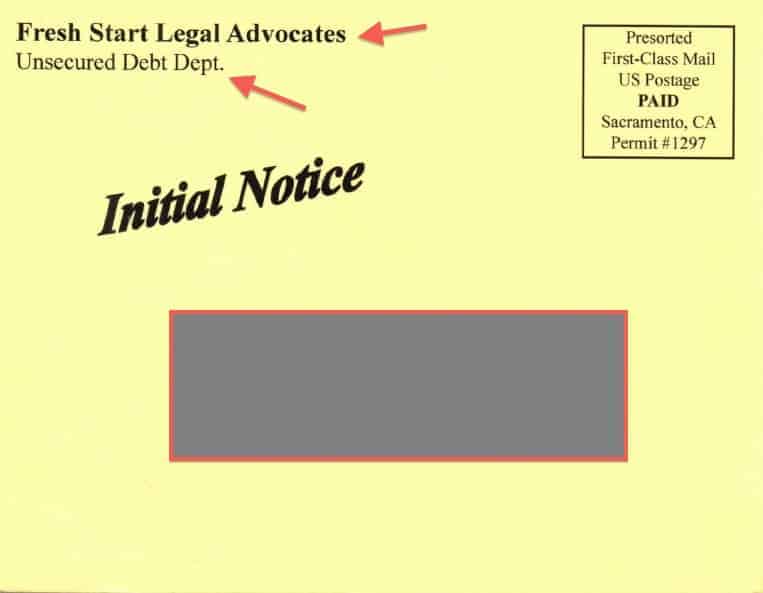 An amazing reader Tissa send in a new debt relief mailer through my I Buy Junk Mail program.

The mailer from “Fresh Start Legal Advocates” was sent from postal permit 1297 in Sacramento, California. The same as another mailer I just covered, here.

But I’m not sure if Thomassen Law Group is embarrassed to use their name on the postcard but I don’t know why they don’t identify themselves as the company mailing this when the web address leads to their site. As you can see this comes from the Unsecured Debt Department. 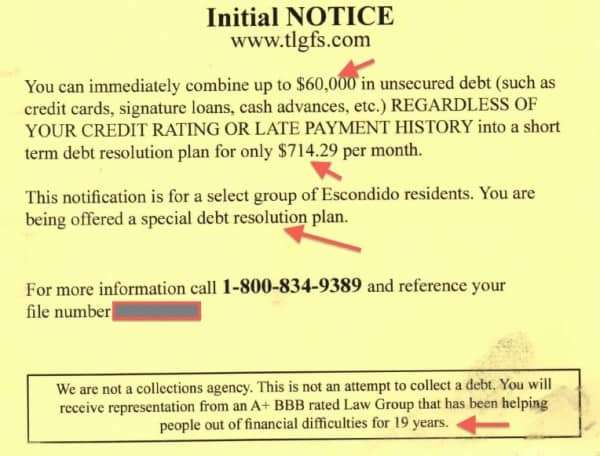 If this postcard was truly sent by a lawyer or real law firm, they certainly don’t appear to provide disclosures either who they are or who the attorney is behind this mailer.

The domain name tlgfs.com has a hidden ownership so we can’t verify who is behind that as well. It does appear the domain name was abandoned in 2009 and was just recently registered again on June 7, 2013. – Source

The postcard promotes an unidentified “short term debt resolution plan.” And promises a payment of $714.29 a month based on $60,000 in unsecured debt. The card says the company behind this is an A+ rated BBB that has been helping people out for 19 years. So that would be since 1994.

The tlgfs.com (Thomassen Law Group) website says they are located at:

That address happens to be a virtual office space through Regus. – Source

Now there is nothing wrong with virtual office space but you would hope a law firm would have a regular physical office since the BBB says they have 48 employees. – Source

Is this where they all work?

According to the State of California there is no company registered under the name Thomassen Law Group. The BBB reports the person behind this outfit is attorney Marilyn R. Thomassen whose office is located at 1918 Dover Drive, Newport Beach, CA 92660. I don’t know why she wouldn’t list her alleged law firm address. – Source

For an attorney who has been practicing for a long time there is surprisingly little online about her as a lawyer.

But in one court document filed January 30, 2013, a consumer who hired Thomassen to “avoid bankruptcy” and settle her debts, wound up filing bankruptcy.

Plaintiff alleges that she retained the Defendants to provide debt settlement services so that she could pay her creditors and avoid a bankruptcy filing. Plaintiff’s Complaint pleads the following causes of action, all predicated on the Defendants’ alleged pre‐petition conduct in attempting to settle her creditor claims for less than the amounts owed:

The complaint filed by the New Jersey consumer alleges Marilyn Thomassen is not admitted to practice law in New Jersey where debt relief services were sold.

The attorney for the consumer in this case stated:

Defendants, MTA, LOMT and TLG take their fees for their services from the first several payments and, thereafter, the excess funds are deposited to a private savings account so that the Defendants MTA, LOMT and TLG can negotiate reduced payoffs of alleged debts in settlements.

Defendant TLG’s online advertising focuses on debtors who are considering bankruptcy as one of their options, stating:

As most people will concur, when considering financial relief, bankruptcy should always be the option of last resort. Any form of bankruptcy will tarnish your credit for up to ten years and, in some instances, can force you to liquidate assets you’ve worked long and hard to acquire. In the case of a Chapter 13 bankruptcy, you will come to clearly understand why an attorney who specializes in this area of the law will warn you that this avenue is exceptionally invasive into you and your family’s financial life and, accordingly, is never pleasant. In 2005, you may remember reading that the United States Congress, through pressure from the banks that created the credit card industry in the first place, fundamentally changed the bankruptcy laws, thereby making this process even more restrictive and difficult. http://www.thomassenlawgroup.com/non-bankruptcy.php (accessed July 6, 2012)

[Ed: That’s what I like to call, well, bullshit.] And what makes this statement even more odd is the fact Marilyn Thomassen has filed a number of bankruptcy cases on behalf of consumers through Marilyn Thomassen & Asosciates, 2670 South White Road, Suite 119, San Jose, California 95148, feuys@drlawcenter.com – Source

Plaintiff contacted TLG after searching on-line for an avenue to resolve her debts without filing for bankruptcy relief.

Ms. Lubetsky was thereafter sent a “Retainer Agreement” via email to her residence in the State of New Jersey and agreed to pay $833.70 each month for at 30 months, at which time Defendants assured her that her debts would be resolved for less than the full amount owed.

TLG and/or MTA was also to be paid, pursuant to the Retainer Agreement, a contingency fee of 15% of any reduction in debt on each settled account at the time of settlement.

At no time did Ms. Lubetsky speak with an attorney licensed to practice in New Jersey.

Following the Defendants’ retention by Plaintiff, Defendants sent correspondence to the Plaintiff’s various creditors advising that they had been retained to represent Plaintiff and that the creditors should cease making contact with Plaintiff. These letters were not signed by an attorney licensed in New Jersey, but rather were signed by Defendant Marilyn Thomassen.

At one point, Defendants associated with a law firm located in California known variously as Emilio Francisco and Associates, Debt Relief Law Center, and by various other names (the “Francisco Firm”).

The Principal of the Francisco Firm, Emilio N. Francisco, Esq., was at all times relevant hereto an attorney licensed to practice in the State of California, but not admitted to the practice of law in New Jersey.

Moreover, no attorney at the Francisco Firm was admitted to practice in New Jersey.

The Francisco Firm, under the auspices of the Defendants, negotiated the settlement of a litigated matter in the State of New Jersey.

Defendants continued to communicate with Plaintiff’s creditors and attempt to adjust her debts.

At no time did a New Jersey licensed attorney review the Plaintiff’s file, communicate with Plaintiff or otherwise participate in representing Plaintiff.

At no time did any member of the Defendants’ staff apply for admission pro hac vice or otherwise to the bar of the State of New Jersey.

Eventually, Plaintiff realized that she could not afford the payments required by Defendants and requested that the services be cancelled.

Upon termination of the debt settlement program, Plaintiff requested that her “escrow” balance of approximately $590 be returned to her, however Defendants failed to return any funds.” – Source

And that is not the only unhappy alleged client.

“Hired these guys . They don’t answer ever . Now I have a much worse problem when I had called in . You call in thinking its an finance expert but it’s just a sales person with a script. Your better off paying the credit cards . And working with then directly . I was told they would negotiate my balances theyve just take money now and never answer companies like this should be shut down . They say thy are a rated with the bbb but only for a short time I expect to see an f in the future if they do this to everybody” – Source

An unidentified person responded as Thomassen Law Group, “Feel free to call me anytime with your client id number and I will be happy to address any issues you may have. As you and everyone else knows we are a 100% performance based firm. This means one thing. We make no money unless we succeed. So, people may attempt to level all sorts of scam charges against us but they really make no sense. If we do not perform we make zero money. Our BBB rating is there because we work very hard for our clients and we are 100% on the up and up.”

Apparently you can become an affiliate of Thomassen Law Group. 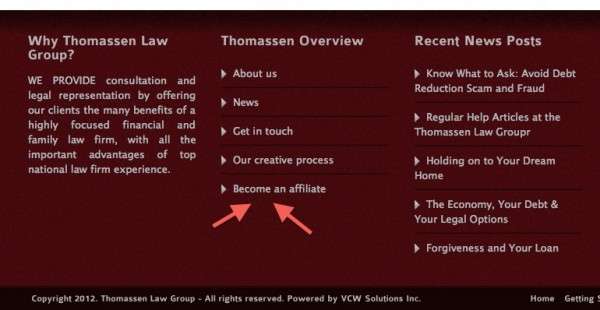 And the Thomassen Law Group site still today makes some very odd claims about bankruptcy considering the fact attorney Marilyn Thomassen filed a chapter 7 bankruptcy for a consumer as little as three months ago and was paid $1,500 for doing so. – Source

The Thomassen Law Group website makes the following statements in what appears an effort to sell debt settlement services:

A commercial for Thomassen Law Group offered the following disclaimer at the end, “Thomassen Law Group is a partner of Emilio N. Francisco & Associates, LLP. Debt settlement will negatively impact your credit ratings. nonpayment of debt will increase interest or fees and cause collection activity including possible litigation. Read and understand contract terms before enrolling. Individual results may vary and are dependent on factors such as successful program completion, creditor cooperation and ability to save funds. Not all clients successfully complete the program.” But isn’t it interesting that disclaimer was not on the postcard that started this review. – Source