As a consumer debt expert for decades I’ve developed a pretty good sense of reading the tea leaves of debt. Sometimes this means making some sense out of puzzle pieces well in advance of assembly.

I’m getting that same strong sense that student loan debtors are on the verge of a bold new ability to discharge massive amounts of federal student loan debt for some very good reasons. The primary reason is they’ve been duped.

Student loan debt has typically been very, very problematic. Young people, their parents, and grandparents have been placed on the hook for massive amounts of debt that for some will burden them the rest of their lives and actually leave them broke in future retirement. This level of debt, which most incorrectly assume can’t be discharged in bankruptcy, is retarding household formation and robbing people of the ability to save early for retirement.

In the student loan debt situation it isn’t so easy to point a finger at a single bad guy. All cogs of the system have blame to bear in the current student loan crisis. From well intentioned parents who push their kids to go to college that probably shouldn’t, to people who think student loan debt is good debt, to colleges that charge higher and higher tuition and facilitate the loans, to incompetent servicers who give borrowers bad advice on how to deal with loan problems.

Gerri Detweiler, director of consumer education for Credit.com said, “Student loans can be incredibly confusing. Most students have a hard time keeping track of the loans they have, much less figuring out which ones are eligible for what type of relief. Add to that servicers who sometimes give flat out bad advice and it’s no surprise consumers give up or end up making bad choices.”

Curtis Arnold of CardRatings.com said, “I have three kids in college and grad school and, even though I’ve been a nationally recognized expert for 20+ yrs, I have found the student loan industry to be perplexing. There are so many types of student loans and so many changes that have occurred in the last few years, that it’s downright confusing.” The lack of clarity over student loans is why most students look to the school to facilitate the financing. Which they will gladly do.

And the concern over student loan debt is not one for just the younger members of our population, but a growing concern for those over 50. But a couple of recent events have made me believe a simple but easy answer to eliminate their student loan debt may exist for a vast number of federal student loan borrowers.

Recently the Department of Education brought a section of federal law to light that would allow federal loans to be eliminated if, “the borrower may assert as a defense against repayment, an act or omission of the school attended by the student that would give rise to a cause of action against the school under applicable State law.” For more information on this, click here.

See also  ECMC - Your Student Loans are a Life Sentence

And if this approach to eliminating student loan debt is successful the borrower would be eligible to receive any amount paid towards the loan and the school would have to repay the federal student loan back to the Department of Education. In the past few weeks data on school performance has been made publicly available through two excellent websites; CollegeScoreCard.ed.gov and Propublica Debt by Degree.

The resulting set of data from those two sources is frightening.

Last week I traveled to Ball State University, after a very gracious invitation from Dan Boylan, where I spoke to a group of students about debt. As part of my presentation I took a quick look at the reported data about Ball State University and another school in the region, to compare results.

I think you would agree that the value for money Ball State University delivers is good. Their cost is below average while their graduation rates and salary after attending is higher than average. But notice that the average national graduation rate is about 50%. That means half of students never earn the needed degree to receive the maximum benefit of enrolling in school. I’ve seen statistics that show up to 75% of people with student loan debt never graduate when you factor in all types of schools.

So the observation I think is most important from this data is it is quite possible an argument could be made that schools have unfairly misled students into federal student loans when they knew in advance they would never be able to deliver even average performance.

Let’s look at two examples that I spotted during my trip.

Ivy Tech came to me because of some excellent advertising they were doing at the bottom of the TSA bins I had to use at the airport. The ads were bragging about the value of attending and how much it would help students towards future salaries and success. But the data reported paints a different picture.

While the average annual cost of attending Ivy Tech is much lower than average, so are the graduation rates and salary. The data reports only 9% of students graduate after six years.

But in the IVY Tech ads I saw, there certainly was not any claim that 91% of students sold into the school would not obtain the advertised benefit. – Source Following attendance, 53% of students are not repaying their federal loans. The school made the money but the government is on the hook.

Martin University tells the public their mission is, “Martin University’s Vision is to be a Haven of Hope, a Community of Support, and a Premier Leader among Institutions of Higher Education.” – Source

But when it comes to the performance numbers, Martin costs much more per year than either Ball State University or Ivy Teach. According to ProPublica the total cost per year, including tuition, books, and living expenses is $22,038. Low income students paid on average $17,631. The average median monthly student loan debt payment for Martin University students is reported to be $469.03 and most students pay the tuition with federal loans.

Arguments That Will be Made

Some low performing schools will make the argument that they serve a disadvantaged population that is less likely to graduate for a number of socioeconomic factors. I completely understand that position.

Other schools will say they have no control over the seriousness or ability of the students they enroll. I understand that as well.

But the reality is students and their parents are trying to make an investment in themselves and the future. Schools are encouraging students to enroll and will gladly suck in all the easy loans they can deposit from federal and private loans. Up till now, they have not been very accountable to the purchaser for delivering the product they sold.

But if a school is either not achieving the average performance of schools and does not disclose the odds are significantly not in the favor of the student, it seems boldly withholding that information is an unfair and deceptive practice. Fraud maybe?

Why would anyone enroll at the more expensive and lower performing school?

In Indiana, Martin University is not the only school facing poor performance data. 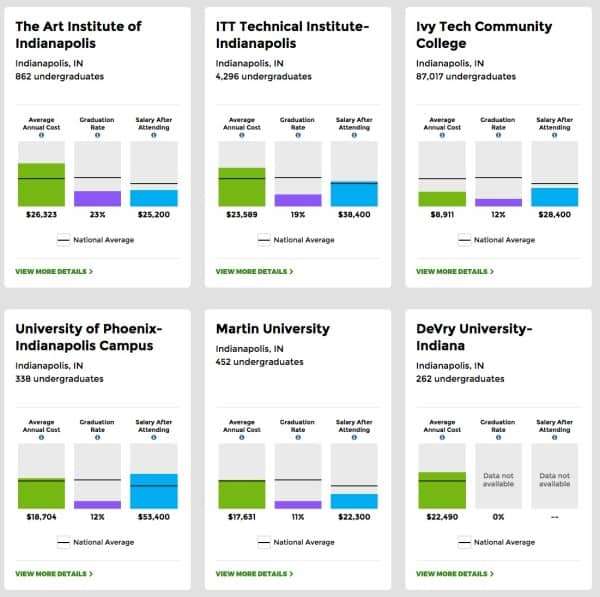 Schools like the Art Institute of Indianapolis have a much higher annual cost and average graduate salaries in the $25,200 range.

It’s not going to be long before attorneys start to see the massive patterns of performance and practices that could qualify for federal student loan discharge as explained here.

Attorney Carl E. Person seems to agree their is an issue to explore here. He said, “Students (and their guarantying parents) before starting to take the course have been defrauded by schools because they don’t tell the students and their parents that the course of instruction does not enable its graduates from the program to earn sufficient income to pay the tuition and maintain a minimum standard of living.”

Think about the situation like this, would you buy a car that only had an 11% chance of achieving the goal of getting you to work?

Some schools will say they are not selling degrees but education and a benefit is obtained by people who take any class. But that’s not what the vast majority of students hope to achieve. They don’t enroll to take a few classes and dropout. They enroll to earn a recognized degree and build a better future based on the degree. The schools should tell the students what the chance is of that actually happening before they sacrifice their financial future to some slick advertising.