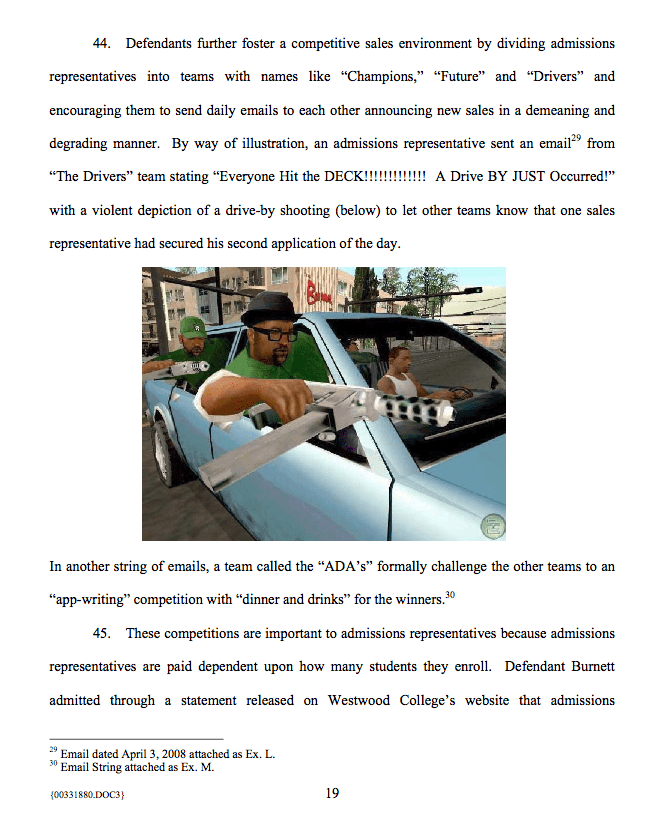 We’ve covered this topic time and time again (see Know Your For-Profit College ABC’s: Assertive, Bold and Cheeky. How I Almost Became a For-Profit College Statistic and Government Finds Fraud and Deception in Marketing for For-Profit Colleges); for-profit colleges and their deceptive practices to get students to enroll and take out loans they cannot afford. However, on August 21, 2010 NPR news brought a new story into the lap of the world, the story of Krystle Bernal, a former Westwood College student that is fighting back.

Krystle Bernal started classes in 2005 at Westwood College in Denver, Colorado. She vowed to be the first in her family to get a bachelor’s degree, she’s now a lead plaintiff in the class action suit against the school.

Bernal, seeing more for her future, signed the papers and enrolled as a fashion merchandising major. She was told that she’d bring in an annual salary of $65,000 after graduation. Now, two years after graduating the best work Bernal can find is a part-time bank teller job for $12 an hour. Based on part-time hours of 30 hours a week (a generous amount of hours for part-time) the most Bernal will most likely bring home is just shy of $19,000 a year. Out of her field and earning $46,000 a year less than the admissions representative projected she’s trying to survive as well as make payments towards her $75,000 student loan bill for attending Westwood.

Bernal says she checked out a community college to see if she could pursue a second degree, but the school said none of her Westwood credits were transferable. Now she’s left with loans hanging over her head and few prospects in a poor economy.

“That’s what I wake up with every single morning — I think about my debt and where I’m at and how I thought my life would be different,” says Bernal.

The class action lawsuit was filed last week in Colorado and claims Westwood committed basic fraud and lied to students to get their money. Westwood College claims they are simply a victim of a predator law firm and that a relatively high percentage of students are pursuing a career in the field they graduated in. However, senior partner, James Hoyer from the Tampa based firm that filed this suit, has had an overwhelming response from near 800 former Westwood students that felt they had been cheated as well.

“There’s $20 [billion] to $30 billion in federal money going into these schools every year,” says Hoyer. “The schools get their money as soon as they get you to sign; and then it really falls on the shoulder of these kids and taxpayers.”

You can listen to the entire NPR news story here.

READ  Can You Help Me Find a Debt Consolidation Company That Will Work With Me? - Scott

We’ve seen from the previous GOA undercover report that sent in disguised students to 15 different for-profit colleges and found many of them to encourage fraud and engage in deceptive practices.

What I found particularly interesting in the lawsuit against Westwood was the mention of an e-mail between admissions representatives at the college which showed their sales and competitive nature to a whole different degree. The e-mail included an illustration of a violent “drive by” cartoon image and a comment that let other representatives know that a drive by had occurred since one sales person has received their second application of the day. It can be seen in the screen shot below. For a deeper look into the sales and marketing of for-profit colleges please view the third segment of “For Profit Colleges – An Expose” by YouTuber “alowlyapprentice”.

The entire series can be found here.

It is appalling to me that these for-profit colleges are preying off of vulnerable consumers in this country. Most of the first time or even returning students are going to school to better their quality of life, not to get sucked into outrageous student loans. It’s a real shame because the concept of these schools, focused towards working individuals, would be a great tool for those that could not afford to go to class during the day due to work schedules. Unfortunately, this tool would be ill advised unless you want to work until you’re well into your 80s to pay off the mountain of debt you’d incur.