This comes straight from a tipster (send in your tips here) who directed me to the site of Cotchett, Pitre & McCarthy. I reached out to CPM for additional information but as of the time of publication I had not heard back.

The suit and investigation arise out of the relatively new sub-prime credit counseling industry. The industry was created by the nation’s leading creditors (including leading credit card companies) to use third party, allegedly non-profit “credit counseling” organizations, to secretly facilitate their collections from unsuspecting customers who were in financial distress and had turned to what they thought were non-profits for financial help.

The complaint alleges that Money Management International Inc. (MMI) and others advertised and promoted themselves as non-profit credit counseling organizations whose main purpose was to act on behalf of the consumer. These companies were in fact operating as agents of the consumers’ creditors, including Chase, according to the complaint.

These agencies claimed in their advertisements that they would “negotiate” on behalf of consumers with Chase and other credit card companies to whom consumers owed money — however, as alleged in the Complaint, there was no real “negotiation” — instead there were back room deals between the creditors and the “counseling” agencies designed to collect as much money as possible from unsuspecting consumers.

The lawsuit seeks to recover monies wrongfully obtained from consumers (including Chase credit card holders) who were indebted to Chase and/or who contracted for credit repair and debt management plan services from MMI or credit counseling agencies that MMI has taken over. If you feel you have been victimized by subprime credit “counseling,” please contact us at TAKE ACTION to explore your legal rights.

In addition to the current litigation against MMI, Cotchett, Pitre & McCarthy is investigating claims on behalf of consumers who received credit counseling services from the following credit “counselors”:

While some may view this as yet another frivolous suit and a shakedown, the suit does expose or draw attention to some problematic fundamentals of credit counseling:

This complaint goes back to 2007 but it continues and the roping in of additional agencies is new.

The original complaint reads like a history of the credit counseling industry. You can read the amended complaint here.

Apparently MMI is Settling This Case

I previously wrote about Money Management International intending to settle this case to get out from under it. It is said that MMI is going to settle for $6.5 Million as reported here.

At the time I felt Chase, and to be fair, others, had gone too far in connecting credit counseling compensation with collection performance and not allowing the agencies to shine as good guys based on the overall work they did, even if that work did not result in a measurement desired by the collection department.

From this case is this letter in the exhibits. 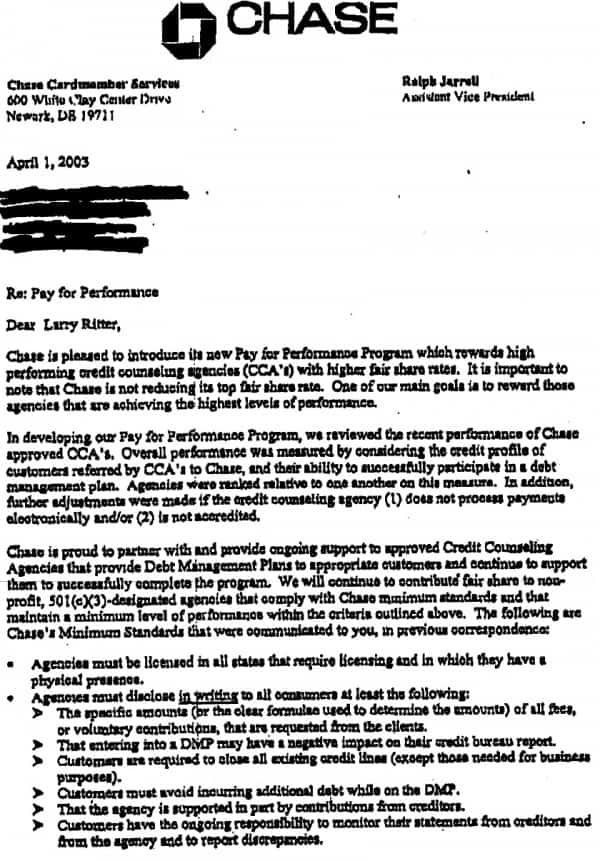 Follow Me
Latest posts by Steve Rhode (see all)
See also  I Have Contacted CCCS and Money Management International And Was Told They Can't Help Me. - Josephine