Today the Consumer Financial Protection Bureau (Bureau), along with the Minnesota Attorney General’s Office, North Carolina Department of Justice, and the Los Angeles City Attorney, announced an action to halt a student-loan debt-relief operation engaged in allegedly unlawful conduct and consisting of several related companies: Consumer Advocacy Center Inc., which does business as Premier Student Loan Center; True Count Staffing Inc., also known as SL Account Management; and Prime Consulting LLC, which is known as Financial Preparation Services. Defendants also include Albert Kim, Kaine Wen, and Tuong Nguyen, whom the Bureau alleges substantially assisted the student-loan debt-relief companies. The Bureau alleges that since at least 2015, the debt-relief companies operated as a common enterprise and deceived thousands of federal-student-loan borrowers and charged over $71 million in unlawful advance fees in connection with the marketing and sale of student-loan debt-relief services to consumers.

When describing the services offered to consumers, Defendants failed to inform consumers that it was their practice to submit false information about consumers’ income, family size, and marital status on loan adjustment applications in order to try to qualify consumers for lower monthly payments.

As described in the complaint, the Bureau alleges that Premier, along with its company co-defendants, violated the Consumer Financial Protection Act of 2010 (CFPA) and the Telemarketing Sales Rule (TSR) by making deceptive representations about the companies’ student-loan debt-relief and modification services. Specifically, the complaint alleges that Premier charged and collected improper advance fees before consumers had received any adjustment of their student loans or made any payment toward such adjusted loan.

Sales representatives frequently represented to consumers that they can get consumers’ student loans forgiven in whole or in part shortly after enrolling in the respective Student Loan Debt Relief Company’s services.

The Bureau also alleges that the defendants engaged in deceptive practices by misrepresenting: the purpose and application of fees charged by the companies, their ability to obtain loan forgiveness, and their ability to lower consumers’ monthly payments.

The Bureau filed its complaint and requested a temporary restraining order in the U.S. District Court for the Central District of California on October 21, 2019. The court granted the request and entered a temporary restraining order on the same date. The court has scheduled a hearing on the Bureau’s request for a preliminary injunction, which is set for November 4, 2019. The Bureau seeks to keep this relief in place while the case proceeds.

The complaint is not a finding or ruling that the defendants have violated the law. 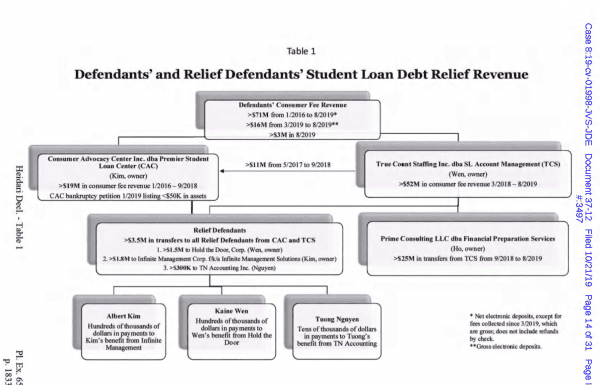