I have to admit I am totally perplexed by the media and popular myths that believe student loans can’t be discharged in bankruptcy. Even a lot of bankruptcy attorneys believe this wildfire myth.

Thanks to some amazing readers and tipsters I’ve just received a collection of cases where the consumer managed to have their student loans eliminated in bankruptcy, right now, today.

If you’d like to do more research about how to discharge student loans in bankruptcy, read my collection of Student Loan Bankruptcy Discharge articles.

Many of the discharges fall into a couple of buckets. There is the unaccredited school discharge, the unqualified educational expense discharge, and the growing undue hardship bankruptcy elimination standard.

Just recently the Department of Education provided a handy chart about undue hardship court guidance. It’s a nice reference if you are talking to a bankruptcy attorney about your situation. 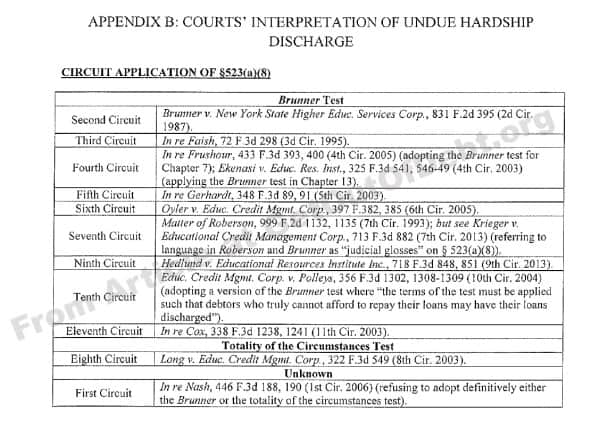 But today I wanted to look at one case I’ve received that shows student loan debt actually being eliminated in bankruptcy.

“In this proceeding, the Debtors seek to discharge under § 523(a)(8) their consolidated student loan. The balance due on this joint spousal consolidation student loan is approximately $83,000 (“Loan”). This Loan was created by a consolidation of Debtors’ individual student loans in 2005. The Debtors do not contest the balance on the Loan or that it falls within the ambit of § 523(a)(8). The original amount borrowed by George was $25,000 and by Melanie was $20,000; these loans were incurred during the 1990s.

George Johnson is approximately 38 years old and his wife, Melanie Johnson, is approximately 36 years old. They were married in 1999 and have three minor children: Maya (11 years old), Xavier (8 years old) and Trey (5 years old). Neither George nor Melanie has any mental or physical disabilities that keep them from working; their children also have no mental or physical disabilities. However, George regularly needs allergy shots. One of their children has asthma. Their daughter recently received orthodontia. All of their parents are alive.”

“Melanie Johnson obtained loans while attending the University of California-Davis from 1994 through 1999. These loans were the subject of an individual consolidation that initially occurred on March 28, 2003, and then again on April 26, 2004. Those loans were zeroed out as a result of the spousal consolidation loan that occurred on August 26, 2005 (the Loan). George Johnson obtained loans to attend the University of St. Mary from 1995 through 1997. He then consolidated those loans individually on July 23, 2004, and then again into the spousal consolidation loan on August 26, 2005 (the Loan). The Loan had an initial disbursement of approximately $63,000.00.

Melanie attended the University of California at Davis from August 1994 to June 1999 with a major in biology. She claims to have almost obtained her degree, but did not complete it. Melanie is one class short of a biology degree. She states that her positions with the federal government were obtained in part because of her education.

Evidence presented to the Court appears to demonstrate the family is living on the financial edge and the Judge even noted he felt the expenses were under-reported. Judge Berger said, “Debtors’ expenses seem unreasonably low, and any significant reduction in their living expenses would most likely be offset by future expenses. This Court agrees with Judge Karlin who, in In re Quarles, observed that even where a car might soon be paid off, “to completely deduct that payment from the Debtor’s monthly expenses ignores the fact that the nine year old car will almost certainly need to be replaced at some point in the near future.” In addition, as cars grow older, “there will likely be an increase in maintenance costs for the aging car until it is replaced.” As noted supra, because Debtors’ projected monthly expenses for car payments, for maintenance, and for gasoline are unrealistically low, an increase in Debtors’ monthly expenditures is appropriate. Based on their income history and increasing costs of their family, this state of affairs is likely to persist for a significant portion of the Loan’s repayment period.”

See also  My Private Student Loans Can Be Discharged in Bankruptcy, Right?

This case is interesting because of the spousal consolidation loan. It’s not the typical type of loan you see being discharged in bankruptcy. The public court records offer up evidence the court did a substantial review of the current reality the family faced.

The Court said, “The reality is that even if the Debtors’ gross income were $60,000 per annum, providing for a family of five would be a Herculean task.”

Even using the common Bruner Test to determine undue hardship discharge eligibility, Judge Berger said, “Within an historical context, the Brunner framework is an unfortunate relic.” And the Judge made the observation, “Considering a significant shift of the skyrocketing costs of college education to the middle class over the last three decades, it is disconsonant with public policy and bankruptcy’s fresh start to leave debtors in virtual lifetime servitude to student loans. It is doubtful that Congress intended to leave the courts so constrained or the student borrowers so burdened, and neither the purpose nor the text of § 523(a)(8) demand such an outcome.”

Judge Berger also hit on a topic I’m fanatical about, student loan debt robbing the ability to save for retirement. Want to see how much money you’d lose by not saving for retirement now? Use my online calculator.

“Although the Court finds Debtors’ expenditures toward retirement will inevitably be redirected to maintain their minimal standard of living, to otherwise inhibit their ability to contribute reasonable funds to a retirement plan contradicts the public policy reflected in the Congressional encouragement of self-sustained retirement and, further, would improperly penalize an individual who must either self-fund her own retirement or place her future in the hands of a social welfare system regularly criticized for its inadequacy.”

In an advanced move by the Court, the observation was “This Court must follow the Tenth Circuit’s directive “that debtors who truly cannot afford to repay their loans may have their loans discharged.”

[C]ourts need not require a “certainty of hopelessness.” Instead, a realistic look must be made into debtor’s circumstances and the debtor’s ability to provide for adequate shelter, nutrition, health care, and the like. Importantly, “courts should base their estimation of a debtor’s prospects on specific articulable facts, not unfounded optimism,” and the inquiry into future circumstances should be limited to the foreseeable future, at most over the term of the loan.

The end result of this case, a full elimination of the student loan debt. The Judge said, “Given the facts of this case, the Court finds that Debtors’ small voluntary payments toward their loans, the consolidation of those loans, and the Debtors’ efforts to stay in contact with the student loan creditor establishes that they were acting in good faith. Because Debtors have shown that they have made good faith efforts to maximize earning potential and minimize expenses, the Court finds that Debtors have made a good faith effort to repay their student loans.

Both Debtors testified at trial that they wish they could pay the Loan, and they impressed this Court as honest and hardworking individuals doing their best to provide for their family and to contribute to society. The Debtors seek discharge of the Loan in good faith.

See also  Should We Deal With Our Old Debt or Use Our Cash to Build a House? - Shane

The Court finds that repayment of Debtors’ Loan would constitute an undue hardship under § 523(a)(8) on the Debtors and the Debtors’ dependents. Debtors cannot afford to repay any of the Loan while maintaining a minimal standard of living. Debtors’ current financial inability to repay their student loans is likely to continue throughout any repayment period. Debtors have demonstrated good faith by making voluntary payments toward the Loan. Having satisfied each part of the Brunner test, Debtors are entitled to discharge the Loan.”

So here is yet another example of Sallie Mae and Educational Credit Management Corporation loans being legally eliminated in bankruptcy. This gives these consumers a better chance of doing better financially moving forward and having at least a shot of being able to save for retirement.

But wait for the evil outcome.

Even though the case seems well reasoned and squarely falls under the recent guidance issued by the Department of Education, Educational Credit Management Corporation decided to appeal the discharge. The result of this appeal is more money is spent by the government to further screw consumers buried in unaffordable student loan debt and rob them of any ability to save for a marginally subsistent retirement when they are old.

So here we have the Department of Education saying the loan can be discharged and the Judge in this case did an extensive amount of research as to the affordability and consequences of the discharge. But Educational Credit Management Corporation wants to put the screws to the consumer.

And let’s give a pat on the back to these consumers for representing themselves in this case. They are going above and beyond in accepting responsibility for a fair outcome here.

For the record here, the court documents I’ve linked to an quoted from are part of the public record. I’m linking to them so bankruptcy attorneys and other consumers can better understand the case, discussions, and opinions reached, in hopes more brave consumers will follow the same path.

If you’d like to read the Judge Berger’s extensive investigation and the judgment eliminating the debt, click here and here.