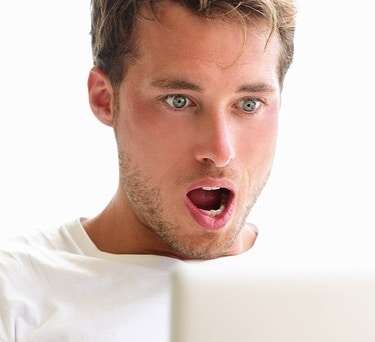 The more I research and study the reality of dealing with student loans through bankruptcy the more I am under the opinion the data does not support the assumptions many have that no good options are available in bankruptcy for student loans.

In fact my research appears to show that even for government backed student loans there are some significant benefits for filing bankruptcy and an adversary proceeding for unmanageable student loans in some distinct situations.

A previous article How to Really Discharge Your Student Loans in Bankruptcy. Many Can. But Never Try. reported on bankruptcy data from 2007 and demonstrated the outcomes people received who did try to deal with their public and private student loans under bankruptcy.

The conventional wisdom is there are no benefits from including student loans in bankruptcy. You might as well not try many say. But for the right person who works with an attorney who is knowledgeable in this area, there appear many benefits to filing bankruptcy.

People are surprised that federal student loans can actually be included in bankruptcy and if they meet certain circumstances and situations the loans can be discharged. Even the Department of Education makes this statement:

This is not an automatic process—you must prove to the bankruptcy court that repaying your student loan would cause undue hardship.

If you file Chapter 7 or Chapter 13 bankruptcy, you may have your loan discharged in bankruptcy only if the bankruptcy court finds that repayment would impose undue hardship on you and your dependents. This must be decided in an adversary proceeding in bankruptcy court. Your creditors may be present to challenge the request. The court uses this three-part test to determine hardship:

Your loan will not be discharged if you are unable to satisfy any one of the three requirements. If your loan is discharged, you will not have to repay any portion of your loan, and all collection activity will stop. You also will regain eligibility for federal student aid if you had previously lost it. – Source

In 2012 there were a total of 52 adversary proceedings filed for government backed student loans that were resolved by the time of this article.

If we filter out the cases that were combined, contained filing errors, or were dismissed for no apparent reason, we wind up with 35 cases of value to study. But one of those cases is a true outlier since it was made using an ineffective argument that the education was not worth the cost of the loan rather than for hardship. – Source

Of the remaining cases of interest: So let’s look closely at those cases. You will find the supporting documentation on those individual cases below.

But My Conclusion First

I must admit it was an interesting experience to tediously look at all the U.S. Department of Education adversary proceedings. It was an eyeopener.

The general perception is federal student loans are not dischargeable in bankruptcy. Obviously that assumption is not true because an allowance does exist for discharge in the case of an undue hardship. But many incorrectly assume that threshold is impossible or nearly impossible to accomplish.

What was interesting was the success of adversary proceedings filed by debtors against the perceived toughest student loans to deal with in bankruptcy. Of the cases studied, 47 percent were granted a full elimination of their federal student loans.

Granted, those individuals were typically lower income and had some sort of mitigating medical condition or situation. An observation Iuliano made in his study of 2007 data.

The full discharge of federal student loans also appears to have no relationship to the amount owed but hinges on the underlying issued experienced by the debtors. And the inclusion of some of the cases appeared to move along other remedies like payment plans or disability discharges.

The medical situations presented in the cases were impactful in the lives of the debtors but the underlying medical conditions were not rare or isolated. Certainly a much higher number of debtors who filed bankruptcy have some of the very same characteristics but never filed an adversary proceeding to get a full discharge of their student loans.

What was notable was the seeming inconsistency with which the discharges, settlements, or adjusted payment plans were granted. It appeared as if some of the individuals who received some benefit but not a full discharge might have been able to as others had.

If more bankruptcy filers had tried for a full discharge in similar situations, they would have been granted.

A look at the data did make one point painfully clear in the case of U.S. Department of Education loans. People who represented themselves rather than being represented by an attorney, did far worse and most of those cases failed due to missed deadlines or just failing to proceed.

Hopefully this research of the 2012 federal loan data will assist bankruptcy attorneys to develop a streamlined path to seek a full discharge of federal student loans in medical hardship cases. Some of the cases included in the data below appeared to involve relatively little back and forth and no court appearances.

And while this study does not include data of other types of student loans owed, some of the cases did. I was very surprised by the number of private student loans that were fully discharged without tax liability or adjusted because they were included in the bankruptcy discahrge. But there will be more on that to come in future articles as the research continues.

It is probably an unfair comparison to make since the Iuliano study included both federal and private loans but in that student a full discharge was granted in only 24 percent of the adversary proceedings filed in 2007. But it was 47 percent in the 2012 federal student loan cases. 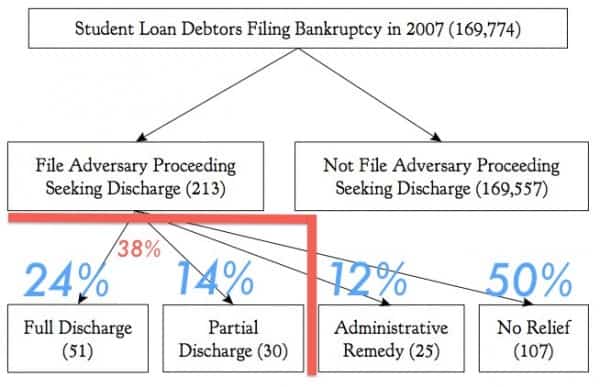 The task of evaluating the student loan adversary proceeding data is clearly a much more comprehensive project today since in the previous study of 2007 data there were 213 adversary proceedings covering a large number or federal and private student loans. In 2012 the number filed was substantially more and the time and cost involved to look at all the cases is very high. From the cases I looked at it does appear as if bankruptcy attorneys are slowly learning their way how to navigate such actions and put them forward more often.

From my closer inspection of the 2012 federal student loan dataset I would have to continue to agree with the conclusion Jason Iuliano reached, except self-representation, in his study. He said:

“Rather than condemn the undue hardship requirement, members of the bankruptcy community should encourage debtors with legitimate need to file adversary proceedings even if they cannot hire an attorney. Courts are willing to grant discharges. The problem is that few people are asking for them.“

What follows is a look at the 47 percent of cases where the federal student loans were completely discharged with no tax liability to the consumer under bankruptcy.

6 thoughts on “Federal Student Loans Discharged in Bankruptcy. A Look at the Surprising 2012 Data and Cases.”